A lot has changed in Port de Port de Pollença over the last 100 years, and so too has Hotel Miramar, although even today, it still maintains its excellent service and affection for clients. Hotel Miramar is packed with beautiful stories written by its owners, but also its clients who return to stay here year after year, and by doing so, continue to write its history. The origins of the Hotel date back to the start of the 20th century. Like a lot of other families, the Borrás Cerdà family earned a living from fishing, tough work for which it used a “llaüt” (traditional Balearic Island fishing vessel). Hotel Miramar provided lodgings for the first tourists such as Fernando Moragues, who was able to photograph the fishing house, used as an inn-boarding house transformed into a modern hotel. Artists also came to the hotel, such as Anglada Camarasa and his group until it became the painter´s residence for a long period. In fact, there were some Argentine artists such as Tito Cittadini Aníbal Nocetti, Roberto Ramsugé, Luis Cordiviola and the Mexican Roberto Montenegro, disciples of the master Anglada Camarasa, as well as Gragorio López Nagil. Jorge Enciso, Adan Diehl, Juan Vives LLull, Rafel Duran-Camps returned to Mallorca and moved into Hotel Miramar while they awaited a permanent residence on the island.

There are several accounts that recall the great Anglada Camarasa´s stay at Hotel Miramar. A good example is the cartoon that the great artist dedicated to the owners of the Hotel, it reads:

“Two ladies ask a man why he has put on so much weight, to which he responds: I´m at Hotel Miramar. You should see the chef! He is amazing”

Another of the documents that has been preserved is Anglada Camarasa´s dedication in the hotel´s visitor book:

“As a witness and one of the first clients of this hotel when it was founded, I have been able to see the tenacity and affection displayed in work, which along with your renowned empathy and care, has allowed you to create a reputation of being: Magnificent!”

It is also worth highlighting the Mexican painter Roberto Montenegro. He was famous throughout the world for his murals, and lived in Port de Pollença for four years. Between 1914 and 1919 Mallorca became a centre of attention for painters and writers who, fleeing from the horrors of the Great War of Europe, searched for the myth of a lost paradise on a then placid island, where life was happy and slow moving, as if caught between the cracks of history. Many came to Port de Pollença and more specifically, to Hotel Miramar. Almost a century later, this area preserves a great deal of the charm that fascinated men such as Anglada Camarasa, Santiago Russinyol and Roberto Ramaugé, the mythical owner of “Sa Fortaleza”. Among this group of bohemian artists that thought about discovering their uncharted Ithaca on a lost island, there is a major unknown figure. We are talking about a painter whose work bears silent witness to the changes of our politics, but whose name is unfamiliar outside circles of connoisseurs. Roberto Montenegero was indeed a key figure in that era of artistic splendour, which was somewhat worldly. He went on to leave his mark on our land, which is so often forgetful, along with other outsiders, who were able to love the place like it was their own.

Roberto Montenegro, a Mexican painter born in Guadalajara, came to Mallorca at the age of 27. The painter arrived with the belief that he would only spend a short period on the island. On his boat trip towards Mallorca he wrote:

“It was sunrise and from the boat I could see the silhouette of the city of Palma, where the Gothic cathedral stood out along with two or three large buildings enveloped by a pink mist…Right after crossing the light filled city of Palma, I took the little train that goes to Pollença and the splendid mirage began: smiling fields, woods of blossoming almond trees set against the cobalt of the Mediterranean, ashen green olive groves and twisted tree trunks: white homesteads scattered over the foothills of the golden mountains and all under a blue sky, that is only comparable with my distant Guadalajara…”

The fact is that Montenegro was so fascinated by the landscapes and the atmosphere in Port de Pollença that he stayed there for four years that he himself defined as “the most beautiful of my life”. It was at Hotel Miramar where he established contact with Anglada Camarasa, Tito Cittadini, López Naguil, Jorge Enciso and Adan Dhiel. They were all fascinated by the idyllic landscapes of north Mallorca, and lived in their fishing cabins in Cala Sant Vicenç. In the words of Ortiz Gaitán, they had found:

“A state of unadulterated purity, a long way from the tumult of Europe: a Golden Age, a hopeful Arcadia far from the horrors of war and the tyranny of social structure”

Montenegro stayed for a long time at Hotel Miramar, which was the only establishment in Port de Pollença. After such a long time, the lobby of the Hotel has become a little gallery. In addition to some works by Montenegro, on its walls you can admire oil paintings by Camarasa and other painters from the so-called “Pollensa School”. 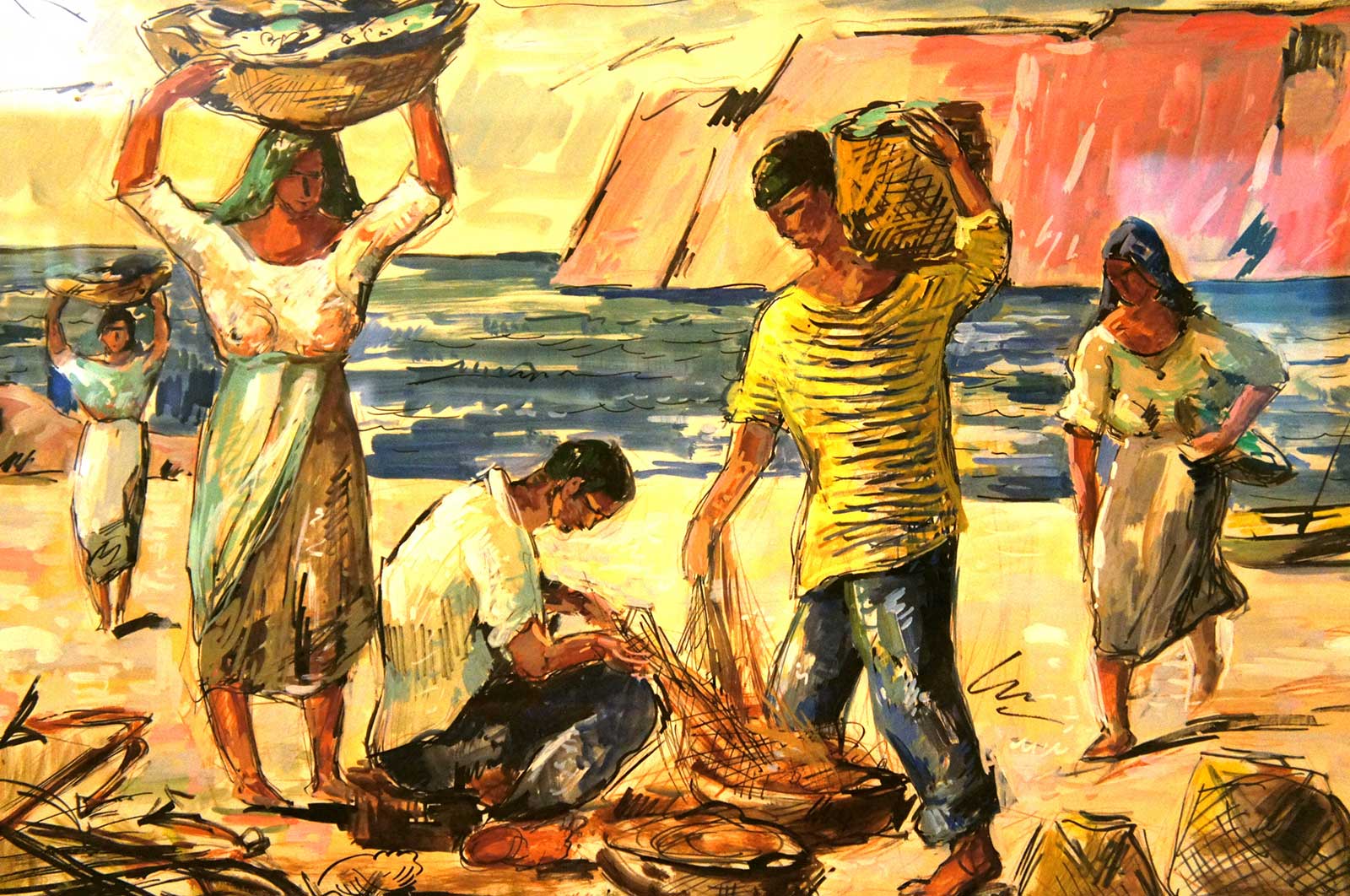 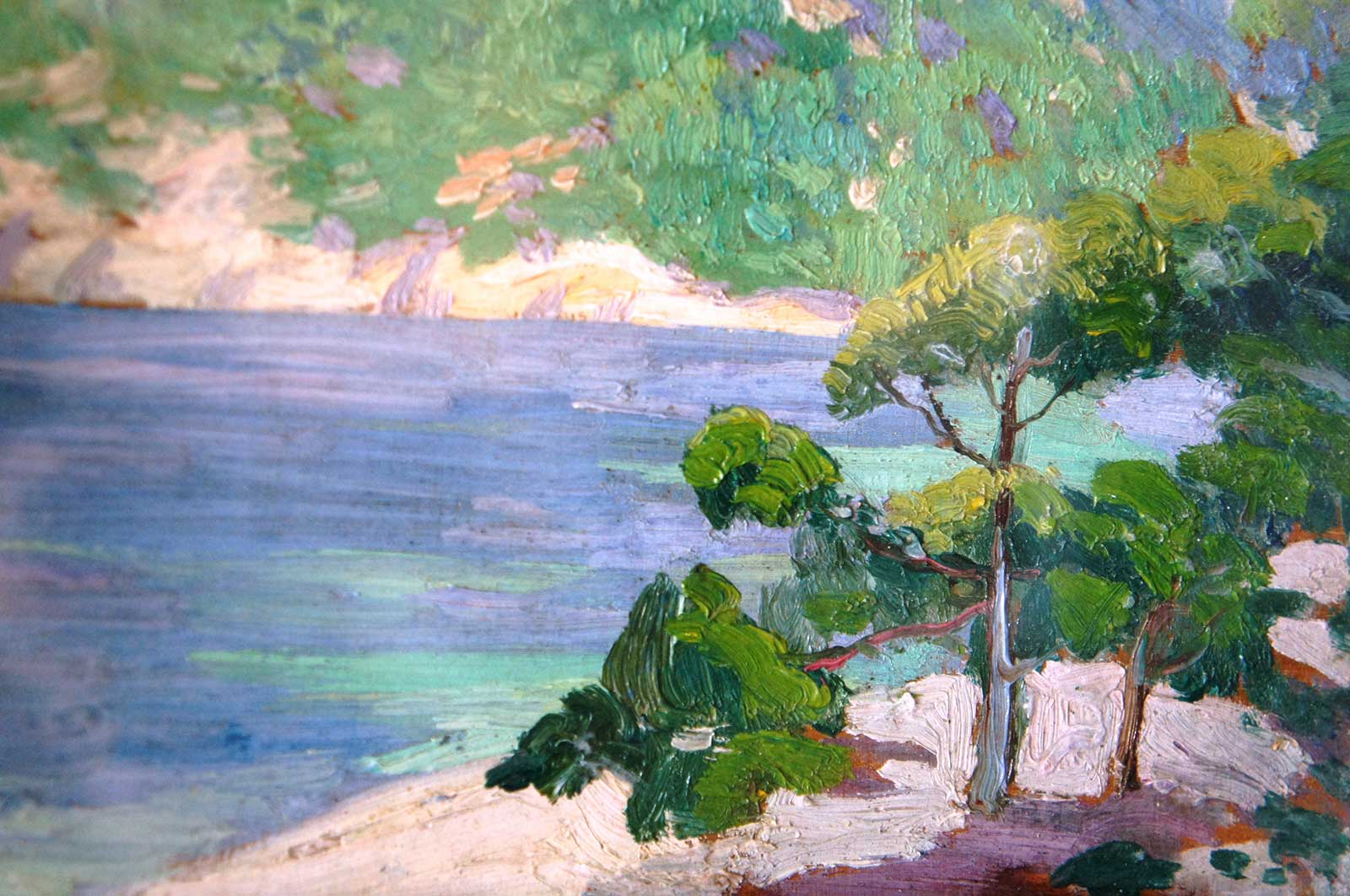 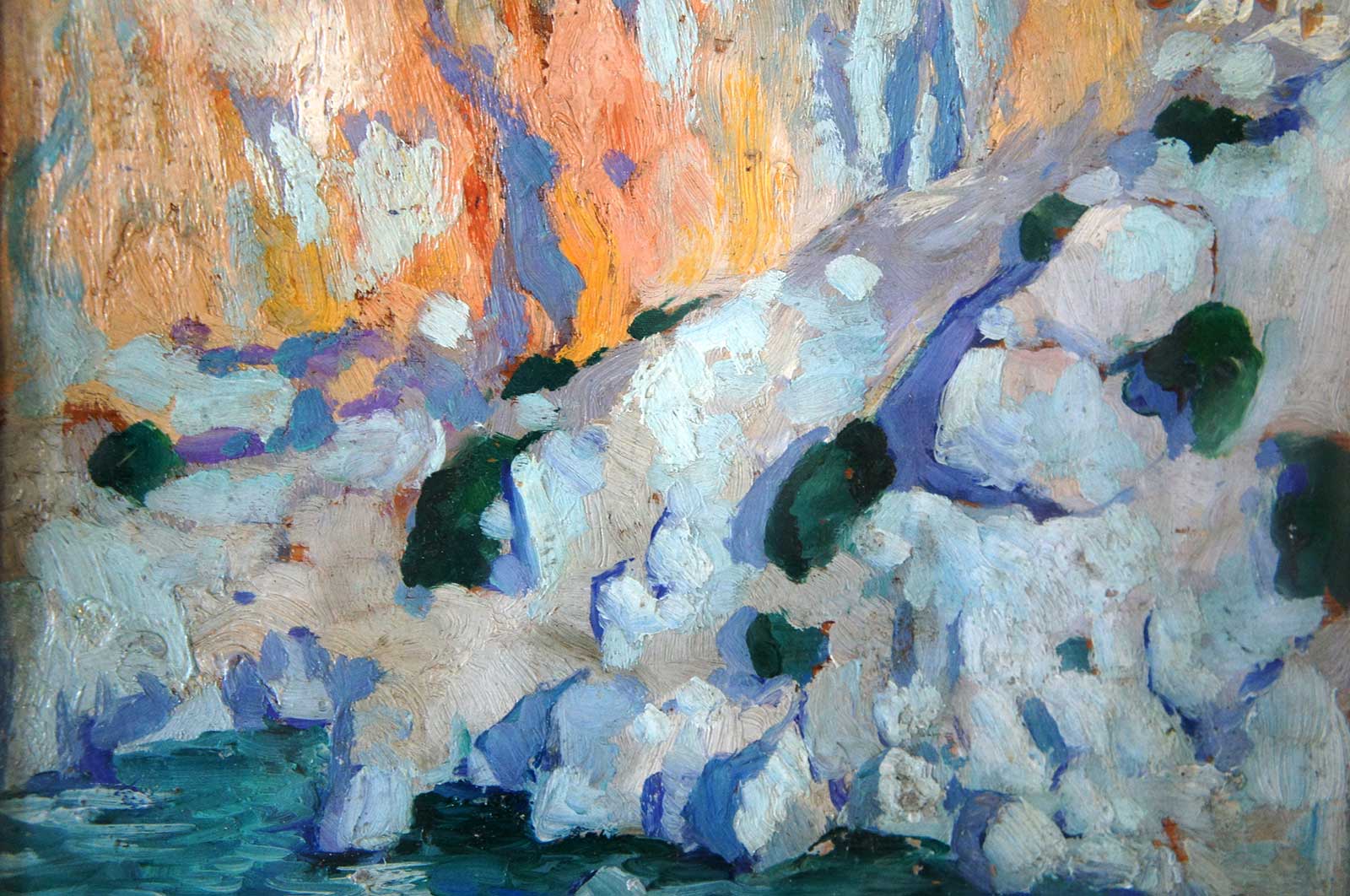 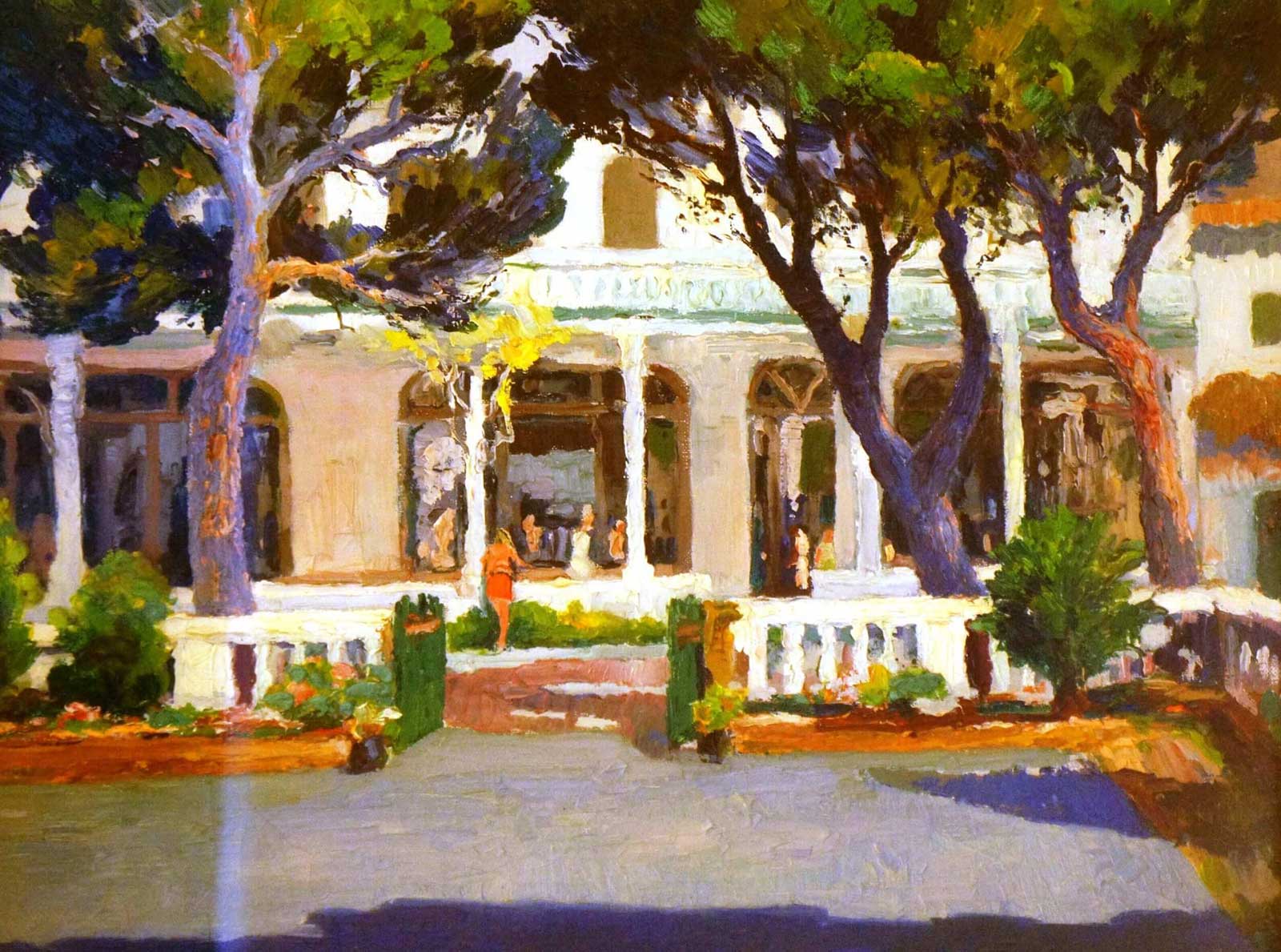 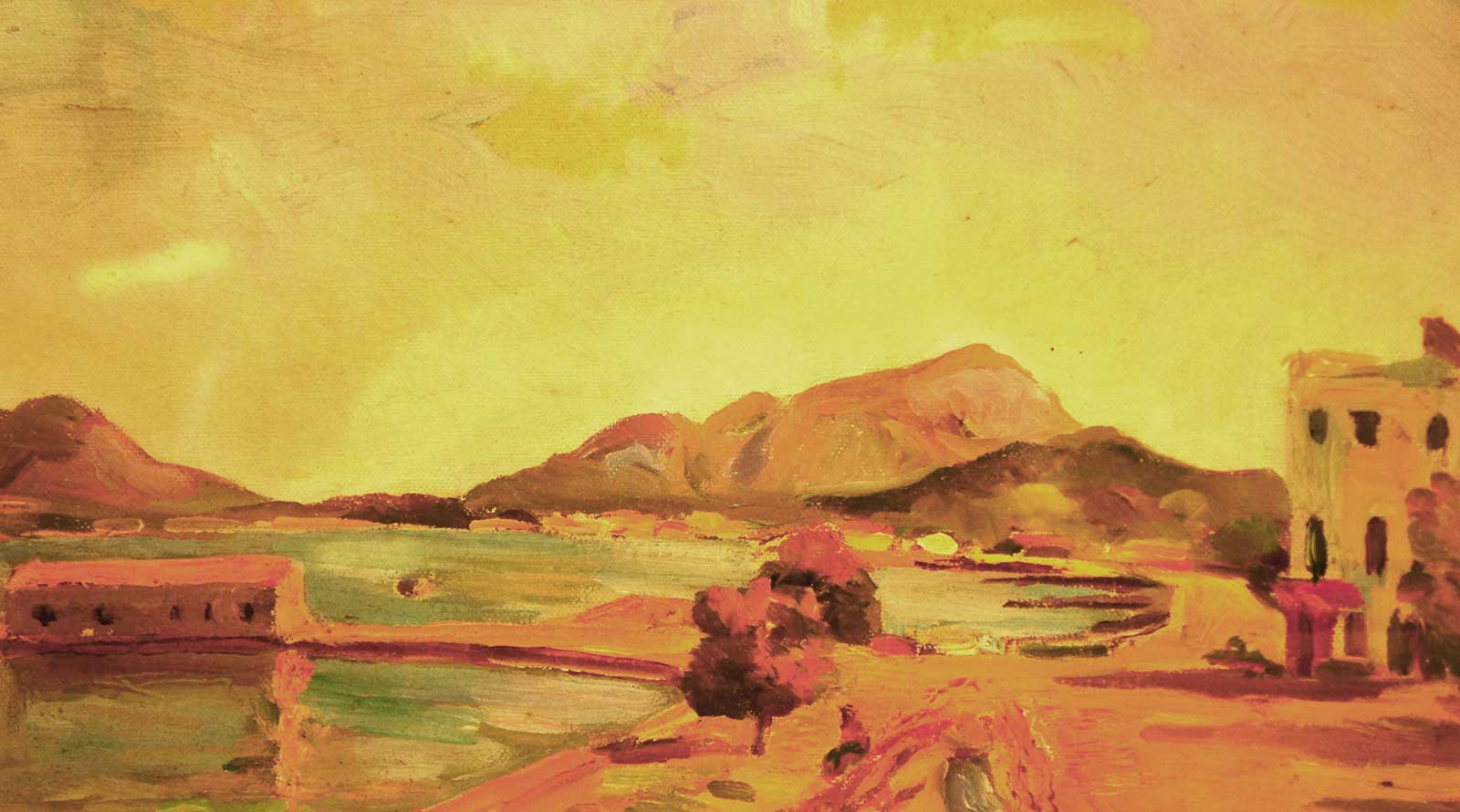 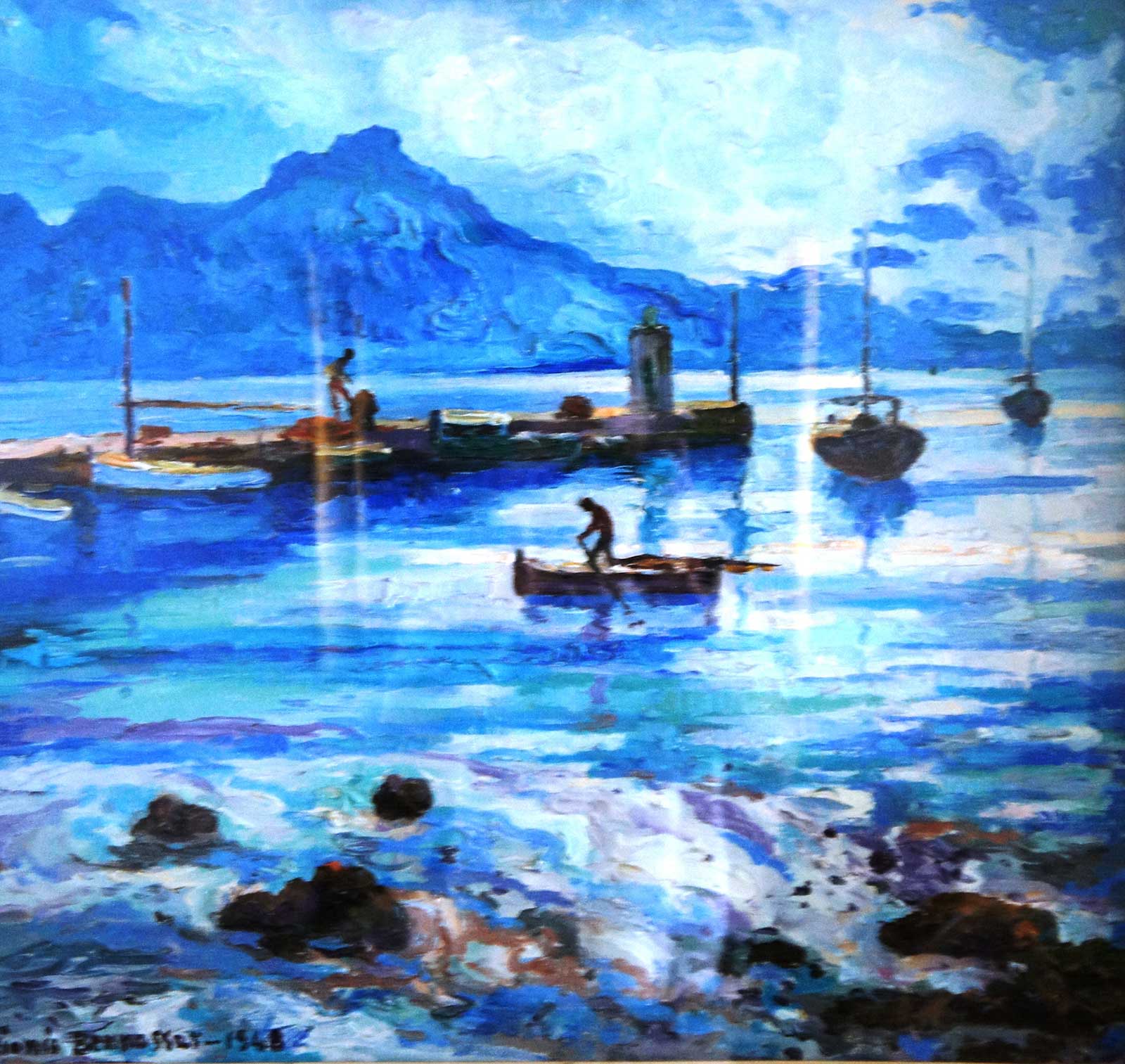 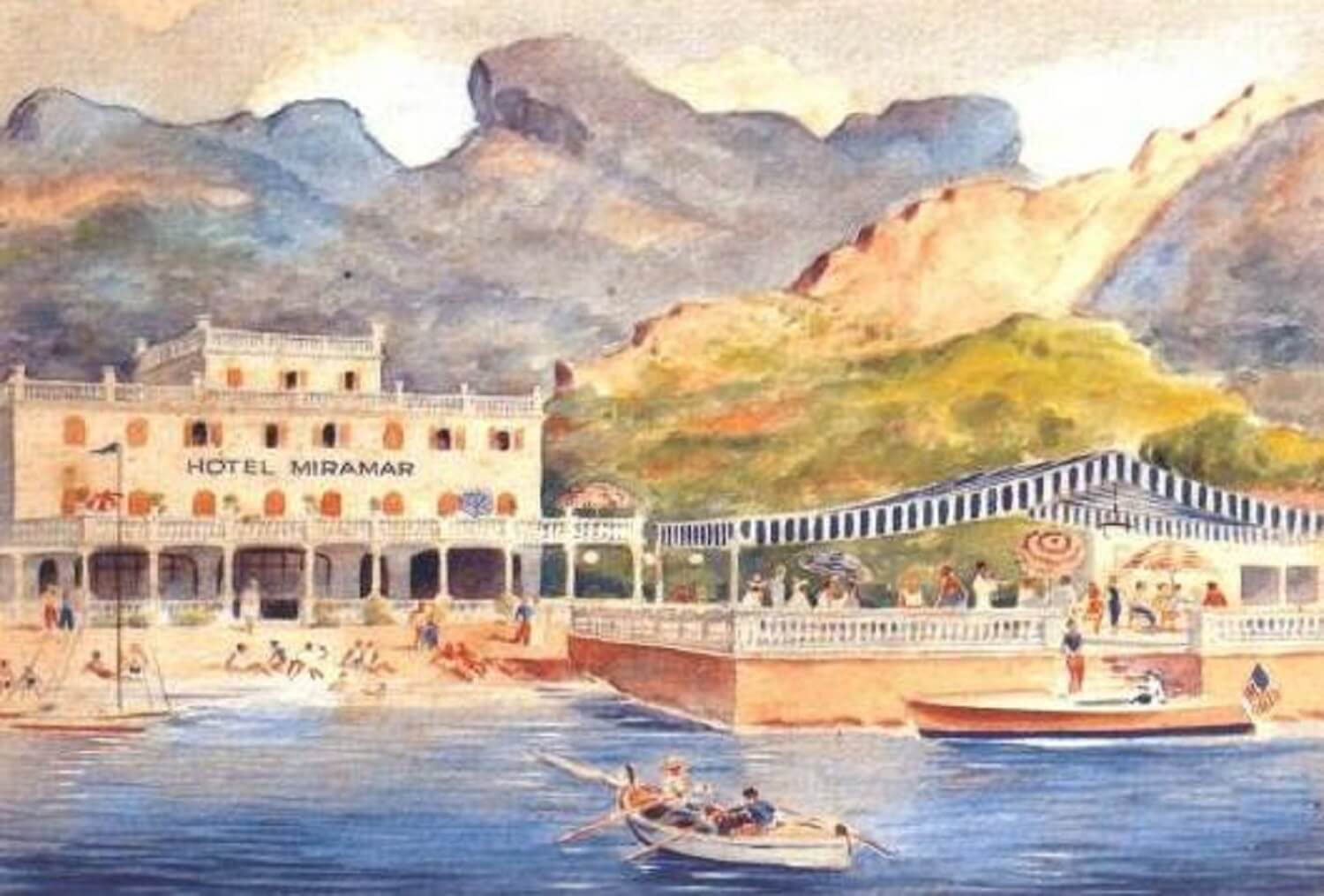 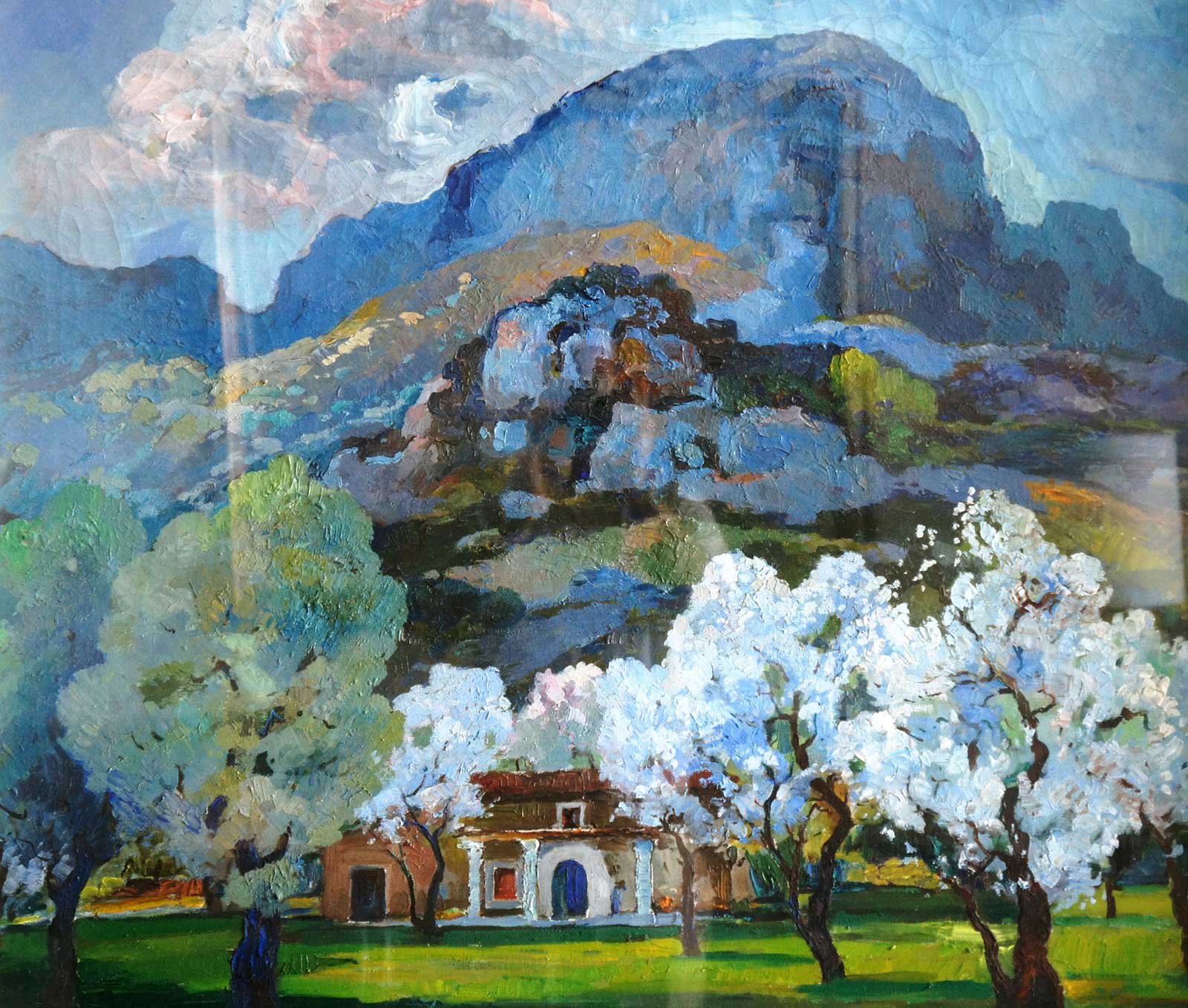 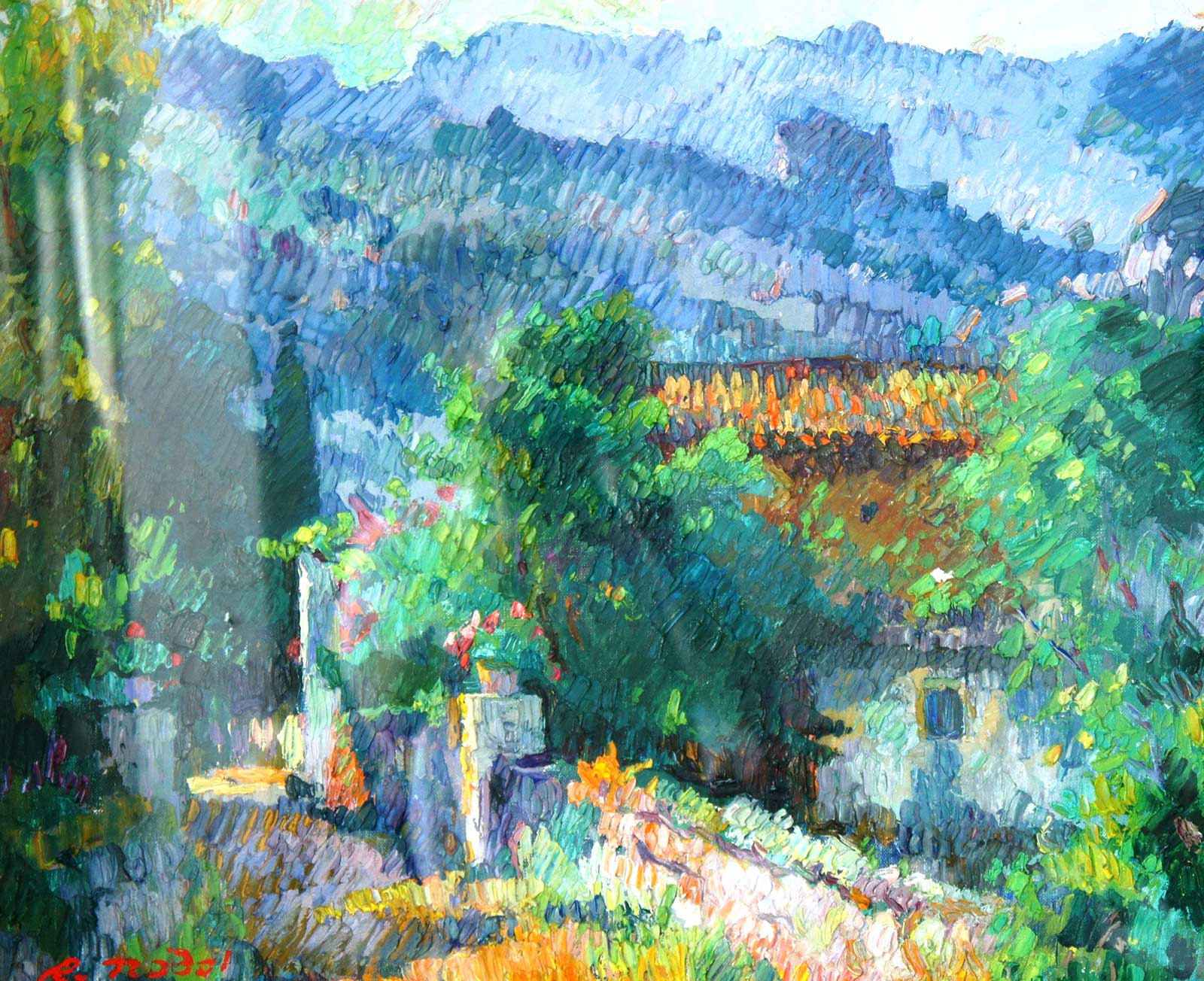 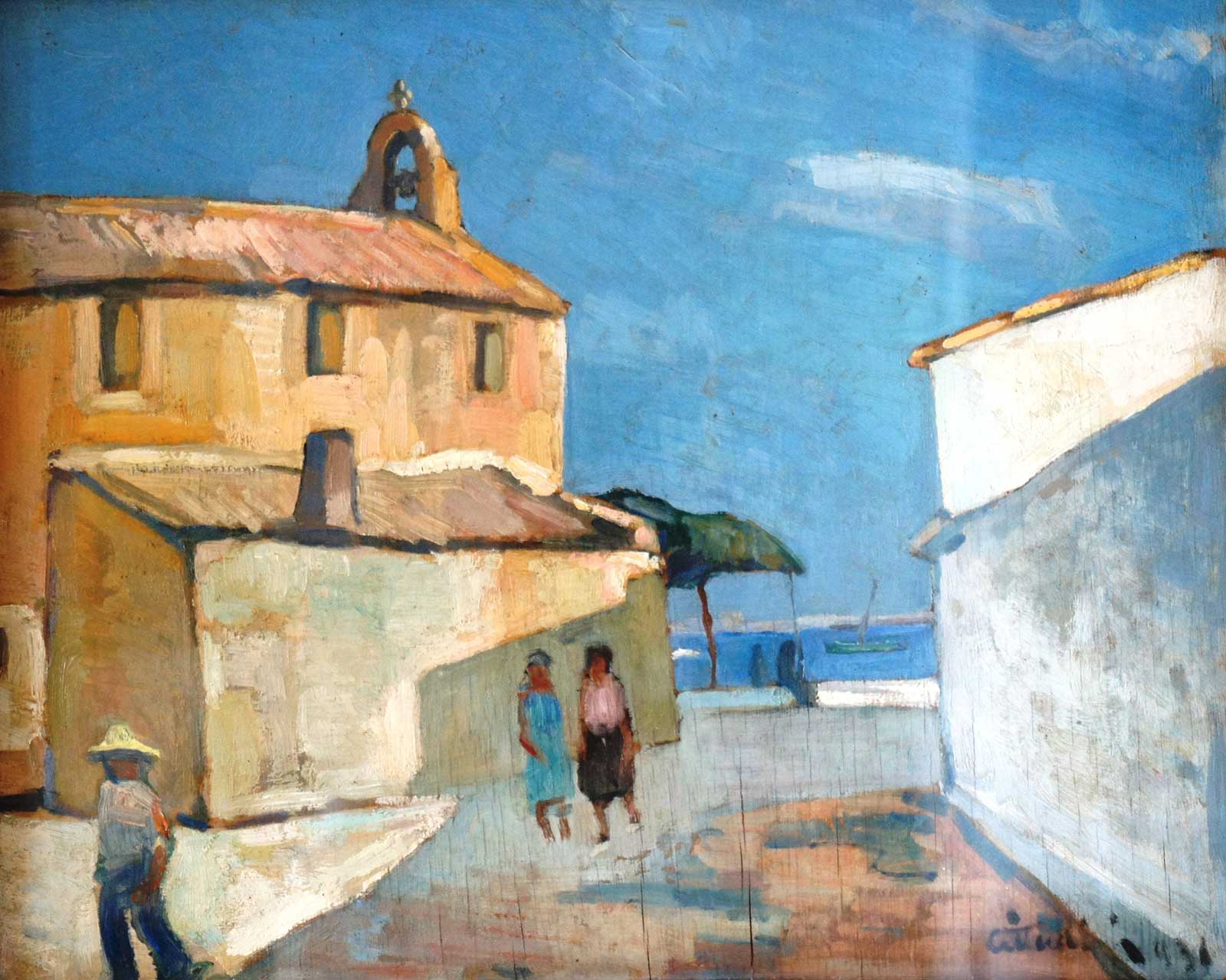 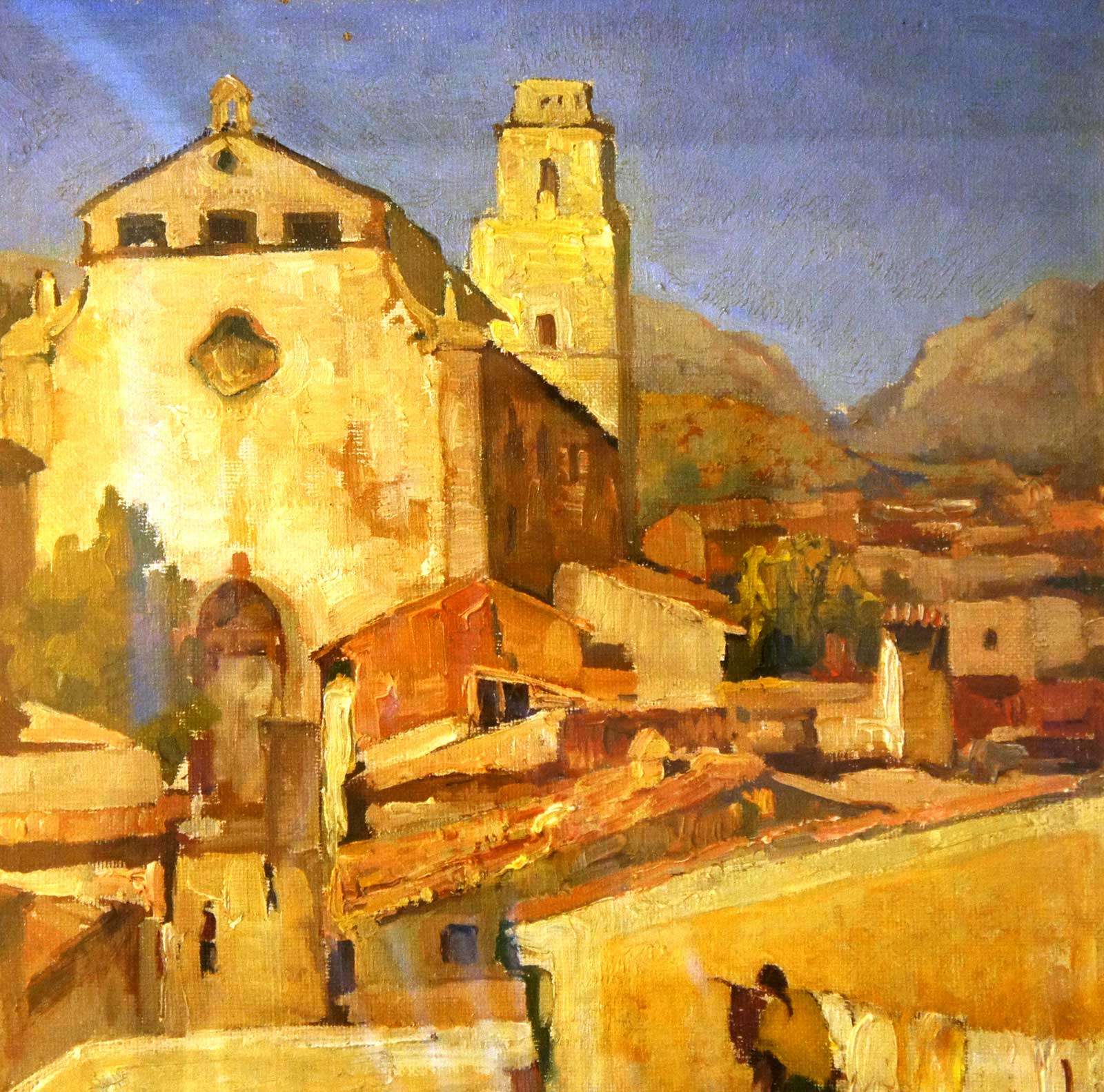 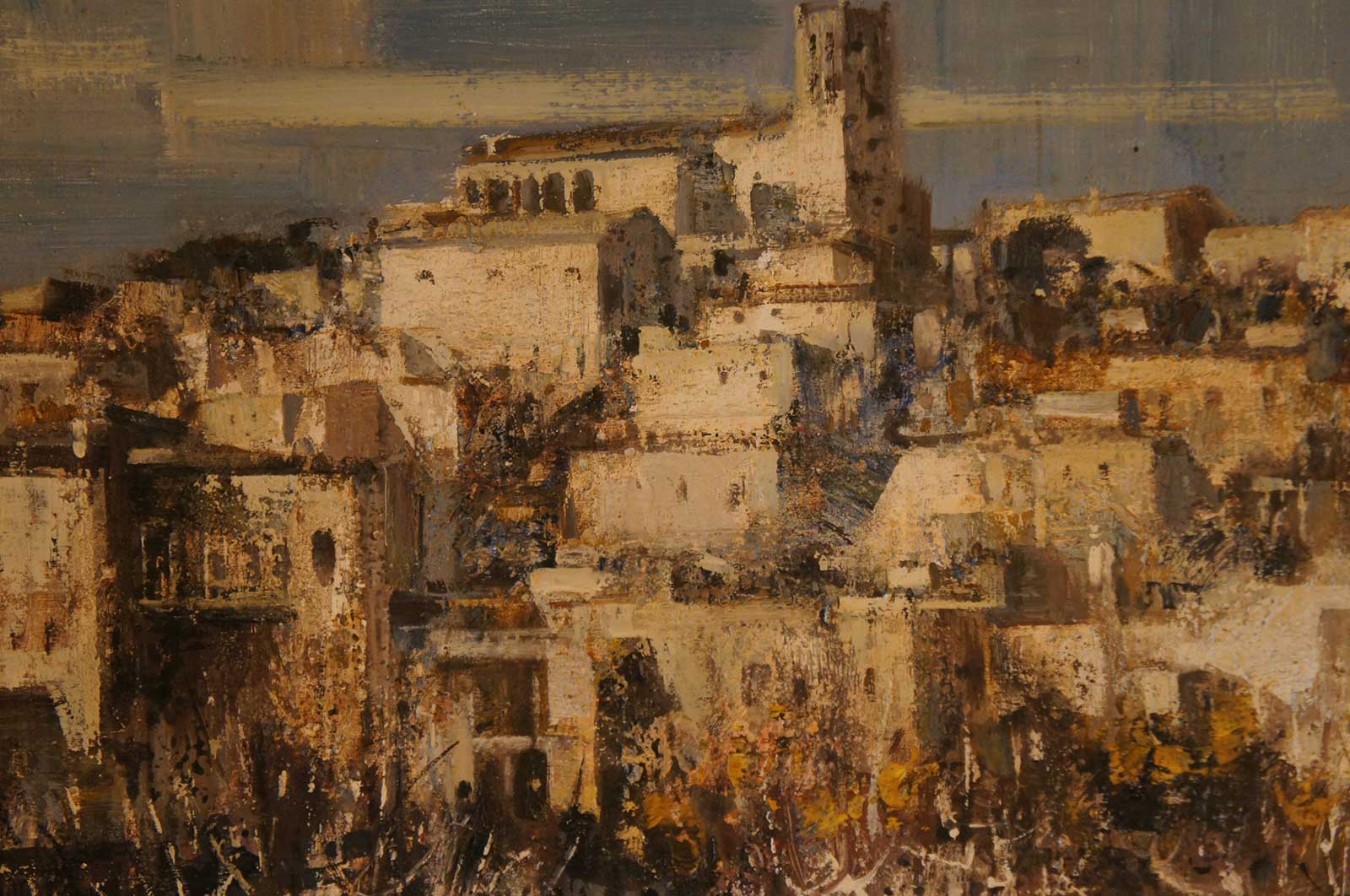 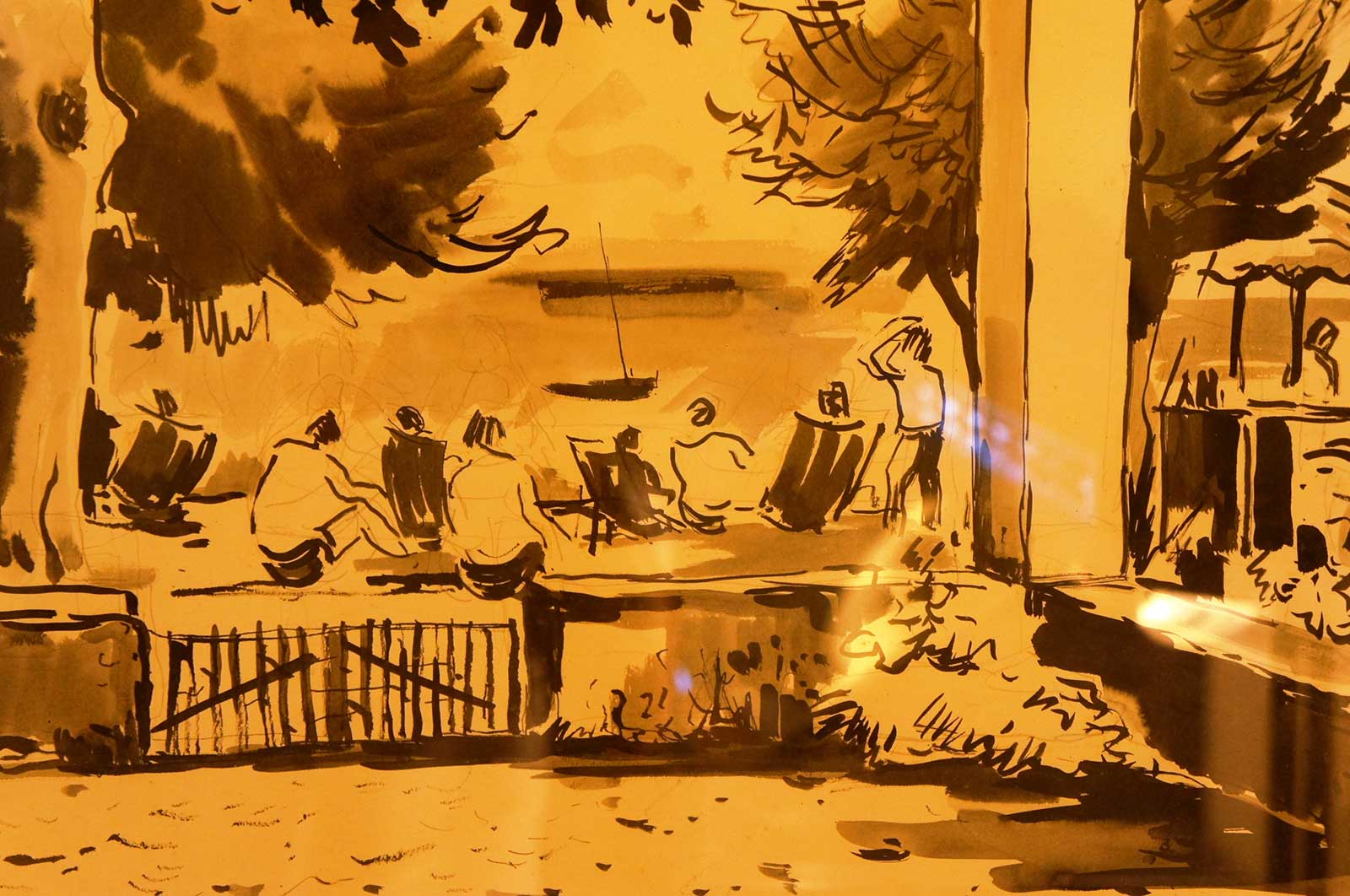 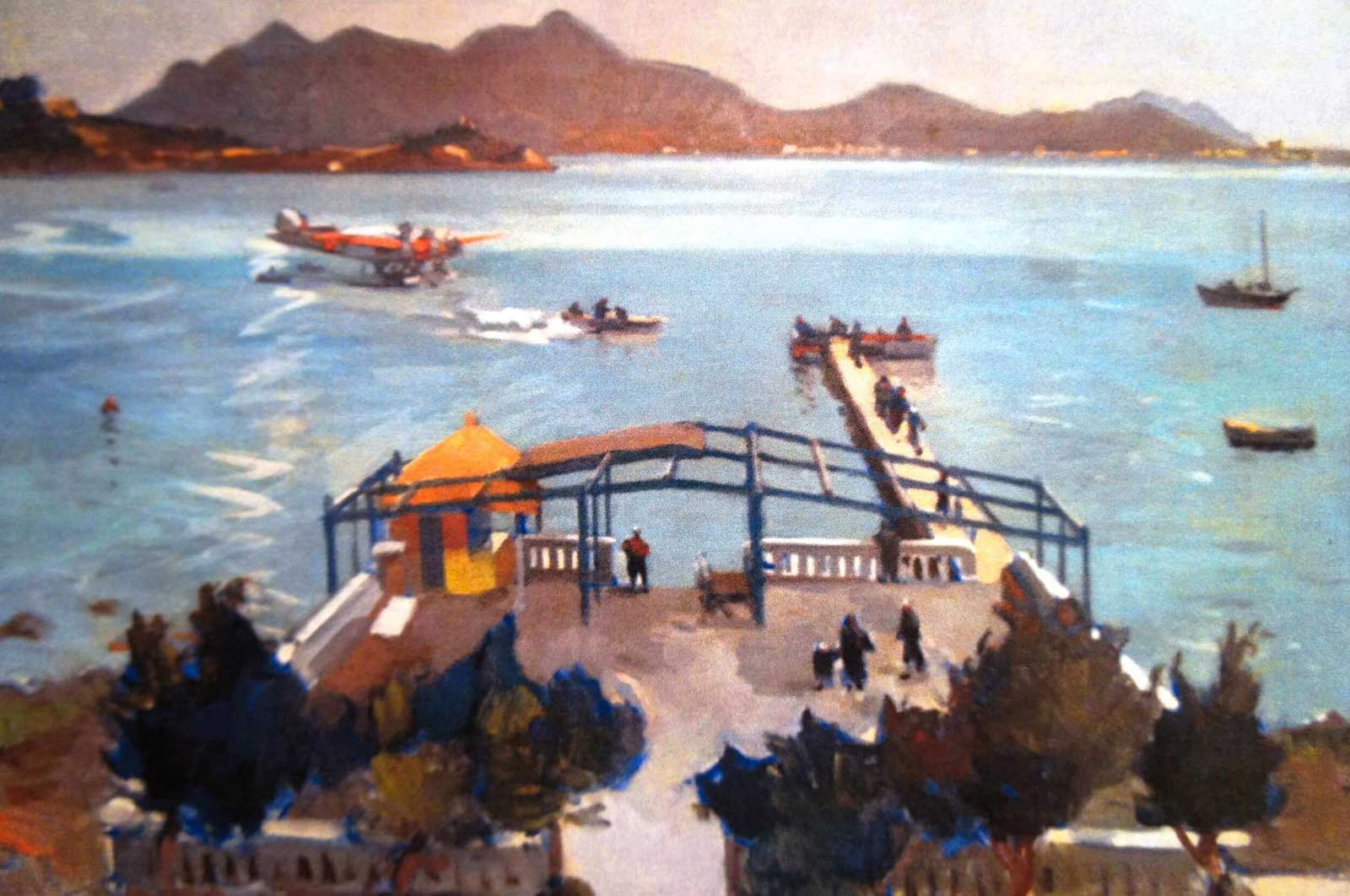